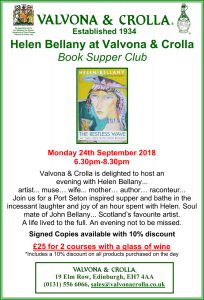 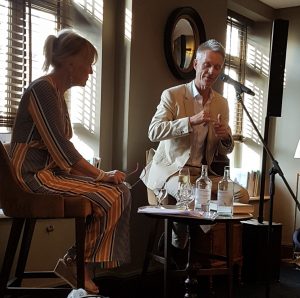 To celebrate the recent launch of Helen Bellany’s new book, The Restless Wave: My Two Lives with John Bellany (published earlier this year by Sandstone Press), Fortnum’s invites you to join Bellany and Tim Marlow, Artistic Director at The Royal Academy, for an evening of champagne, canapés and conversation in our intimate 3’6 Bar. 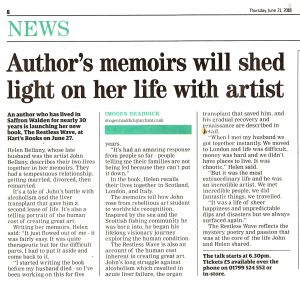 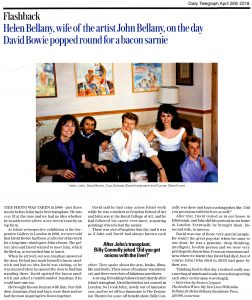 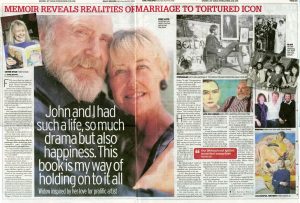 John Bellany was one of the most innovative 20th century British artists, a man whose work was described by the Guardian as “at once realist, expressionist and surrealist”. Born in 1942, he came from a fishing community in East Lothian before studying at the Edinburgh College of Art and, later, at the Royal College of Art in London. Helen Percy was born and brought up in Golspie in Sutherland and began her studies at the Edinburgh College of Art in 1961, a year after John Bellany. The two met in an art class at the beginning of Helen’s second year at the ECA, and within a very short time had fallen in love and decided to live the rest of their lives together. At that point it would be nice to be able to say “and they lived happily ever after”, but the reality was so much more complicated than that.

“The Restless Wave: My Two Lives with John Bellany” by Helen Bellany is the story of their turbulent life – or as the subtitle implies, “lives” – together. At once biography and autobiography, this is a searingly, sometimes shockingly, honest account of a relationship that encompassed both the sublime joy of true love and the utter despair of failure, rejection and the fear of imminent death.

The bare bones of John Bellany’s life could be gleaned from a few minutes spent on Wikipedia, so why embark on “The Restless Wave”? There are a number of reasons, but perhaps the best is to enjoy the flow and the sheer beauty of Helen Bellany’s writing. Helen – as the circumstances of her meeting with John show – trained as an artist, and if we have one regret about this book it is that very little is said about her own art. What is beyond doubt, however, is that she is a highly accomplished writer. She brings to life their student days in Edinburgh in a nicely evocative way, drawing the reader into a world that in some ways has changed beyond recognition since. They then moved together to London, with their first child on the way, hoping that something would turn up in the way of accommodation. Two more children followed as John began to find success as an artist, an artistic and creative ascent that was inversely reflected by the increasingly poor state of the relationship between Helen and John.

Helen Bellany’s writing is in some ways at its most compelling when it is at its darkest. Her account of the years of depression that followed their divorce, and of her despair as their three children each showed every sign of heading off the rails in their own way is remarkable. Meanwhile John had married again, to Juliet, who had her own demons, and was busily drinking himself to death. He had pretty much completed this process, and Juliet had been institutionalised, when Helen and John’s daughter Anya helped bring them together once more. Helen’s second life with John Bellany began under the shadow of his impending death. A liver transplant in 1988 gave him another chance at life, and them another chance of a life together, which they used to the full until his death in 2013.

“The Restless Wave” is a remarkable book, and deserves to be widely read. It is also, at approaching 400 pages, the longest love letter we’ve ever read: but so easy and rewarding to read at the same time. 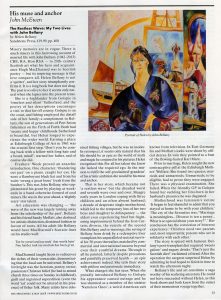